WhatsApp for Android is a light and simple app which can be installed on a smartphone without any hassles. The procedure to set it up and get it running is almost similar in every model of android smartphone supported by it. Just after installation, a welcome screen appears and the user is asked to continue. After that user has to enter his/her mobile phone number so that the annoying feeling of logging in by entering username and password can be avoided.

Then the user receives a code via SMS which should be entered as a proof of being the rightful user and owner of the phone number entered. Then the contact list is integrated and the app is ready to be used. This sort of installation and verification ensures that the service provided by this app can be trusted.

This app can send one-to-one MMS and SMS messages to other users and it is also capable to send group text messages. The messages one receives can be forwarded to other persons in the contact list of user. Similarly, it allows message forwarding to groups.

WhatsApp for Android works on almost all the smartphone models. Earlier, a support for video calls was absent but now its android version offers free video calls to other WhatsApp users. Moreover, it allows sharing of document files with other users. A lot of changes (on the positive side) are done in it since the beginning of end-to-end encryption.

With almost all the android models supported by it, this is one of the best app for instant messaging, sending documents and doing audio and video calls. 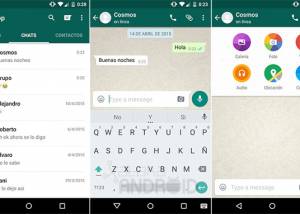 What do you think about WhatsApp for Android?

Last versions of WhatsApp for Android

Downloads of WhatsApp for Android freeware

10 Tips & Tricks to Get the Most Out of Google Drive

6 things you should know about backing up your PC

5 Essential Pieces of Free (and Open) Software for Windows

Get the latest freeware updates and news directly in your inbox. By clicking on "Subscribe" above, you are agreeing to the Terms of Use and the Privacy Policy.
© 2021 TopFreeware  |  All rights reserved.
created by FAUST

Thank you for subscription. You will receive email with next instruction.

If you do not receive the confirmation email within the next hour, please make sure that you used correct email address, and that the message is not filtered by your spam filter.
If the problem continues, please use a different email address.